Congratulations to the gold medal winner. The best mzansi student in CAD.

Rebecca “Becca” Tshuma – The Khuma (Stilfontein) location born and bred “Becca” as known to her friends, started the competition from provincial preliminary levels in Brits Rustenburg 2021 under the supervision and mentorship of one of the most dedicated and passionate Lecturers, Mr Collins Ngomane where she obtained the first position across the province. She went through to the nationals in Durban and once more held her first position and won gold. This after vigorous skills tests and competition in CAD-Computer Aided Design. Becca will be going on to represent South Africa Internationally in October 2022 in France. Tshuma is a go-getter and graduate who received numerous distinctions in her academic record and is an SRC academic officer at Mafikeng Campus. She said she wants to be a great example to the young black child, and show them that an African child can achieve and live up to His/her dreams. She also mentioned that her journey will not stop after the world skills competition as she wants to start something for herself because there is no limit to any career, be it mechanical or any other field of study one may choose to follow.

The event was hosted under the theme “It’s Cool to be a 21st Century Artisan”, the 2022 WSZA National Competition was to incorporate a two-day WSZA Conference at the Inkosi Albert Luthuli International Convention Centre parallel to the National Competition. The DHET is in the final stages of promulgating the National Apprenticeship and Artisan Development Strategy 2030. The conference was to be used as a launching pad   for the promulgated strategy. Also had incorporated at the WSZA National Competition, the National Artisan Development Career Festival which was to be hosted in different selected districts of the Kwa-Zulu Natal province. The career festival aimed to reduce, among others, the stigma related to artisan careers, and to provide information on artisan careers and possible career projections.

The winners at the National Competition got an opportunity to represent the country at the WorldSkills International Competition in France, to compete in different skills areas covering different disciplines. i.e. Construction and Building Technology; Manufacturing and Engineering Technology; Information and Communications; Social and Personal Services; Creative Arts and Fashion; and Transportation and Logistics, among others.

The 46th WorldSkills International Competition hosted in France later this year will feature over 1600 competitors from more than 60 countries and regions, competing in over 63 skills. WorldSkills competitions create a global platform to develop and help young people who want to change the lives and the fortunes of their communities and societies. – Department of Higher education and training. 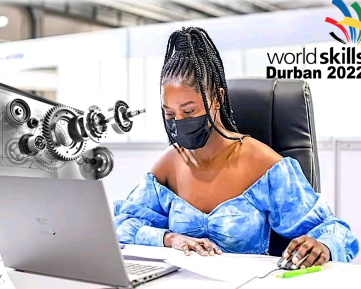